Since 2012, we have been working on energy saving of air conditioners, which is difficult to verify the effect, so that anyone can immediately implement it using CONTINEWM. We focus for hot countries market not only in Japan, because Southeast Asian countries always have a summer climate, and the ratio of air conditioners to electricity costs is much higher than Japan. In recent years, the unprecedented idea and achievements of "recovering wasteful electricity bills" have been highly evaluated, and the adoption by many companies including listed companies is increasing.

What does it mean to recover power?

We have been wasting the electricity bill of air conditioners all the time. The cause is "air (flow path) resistance", which is caused by "positive static electricity" charged in the air conditioner. When the air conditioner is positively charged, the air flow is disturbed and the air flow does not become as designed, so the "heat exchange efficiency" decreases and extra power is consumed. Let's compare this with the fuel efficiency of a car. When driving on a highway at 100 km / h, headwinds increase air resistance and reduce fuel consumption. However, if the headwind disappears, fuel efficiency will be restored. This is the image to "recover". In the case of an air conditioner, it is always operating in a headwind, so it is important to eliminate the air flow path resistance in order to save energy.
CONTINEWM has been installed in many companies. The reason is CONTINEWM recovers power and removes static electricity generated by the operation of the air conditioner and lowers contract demand which is the basic charge for the electricity bill.
Lowering the contract demand value not only reduces daily power consumption, but it also has the synergistic effect of shortening the payout period.
Anyone can use CONTINEWM immediately without modifying the device or turning off the power.

Install CONTINEWM in front of the heat exchanger (upstream side of the wind flow). In which case, CONTINEWM is always maintained at a negative potential, it suppresses the generation of positive charges and changes the air to a zero-charge state. As a result, the air conditioner is not affected by static electricity and can achieve the originally intended heat exchange efficiency. 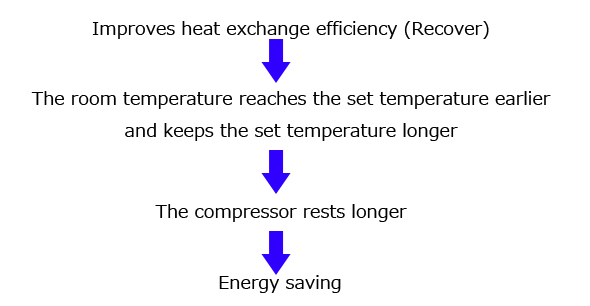 If you measure the surface potential of CONTINEWM, you can see that every part has a negative potential.

The origin of the odor is an invisible minute substance diffused in the air. It is believed that odorous substances and dirt substances float in the air because they are positively charged and repel each other in the air.

However, when the air touches the negatively charged CONTINEWM, it becomes uncharged. Therefore, there is no floating in the air, and it is difficult to feel the smell. In this way, air with reduced odor and dust spreads throughout the space, creating a naturally comfortable environment. .As long as the air conditioner is operating, “energy saving” and “comfortable environment” will continue simultaneously at the same time, so it can be called the CONTINEWM. (continuous)

※unauthorized copying and replication of the contents of this site, text and images are strictly prohibited.

Benefit to use CONTINEWM®

There is no need of the construction. It can be installed while the air conditioner is running. It is easy for the first time.

Improvements have been repeated in order to make it lighter and flexible as performance improves.
Maintenance is easy after installation. No running cost is required.

Just by installing to air conditioner in operation, it recovers the electricity(gas) bill .Contributing to "reduction of carbon dioxide emission" without using any power . 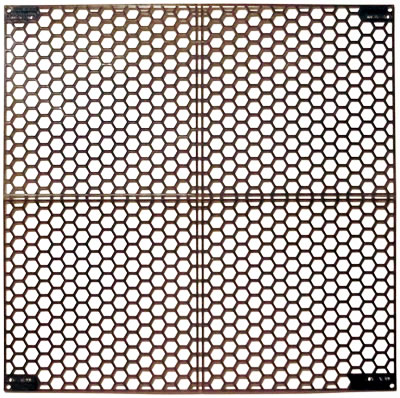 How to install CONTINEWM® 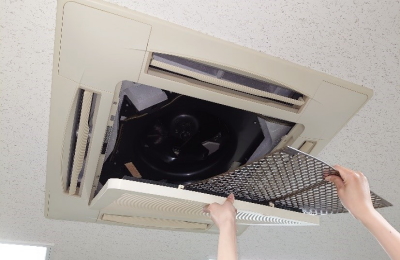 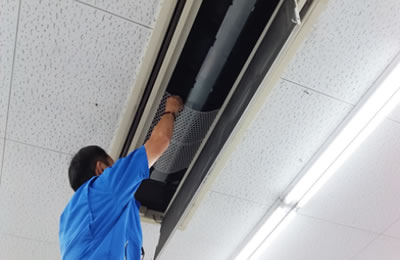 Depending on the size of the indoor unit, cut it to 1/2 etc and place it on the filter, or put it in the empty space as shown. 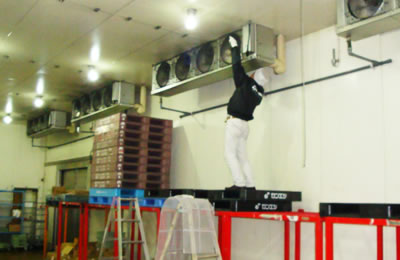 If there is a gap between the cooler and the wall, install it to the air intake (heat exchanger side). 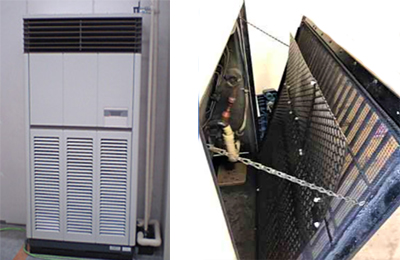 After opening the lower front panel,
cut the CONTINEWM about the same size as the filter, connect them, and attach them to the back of the filter. 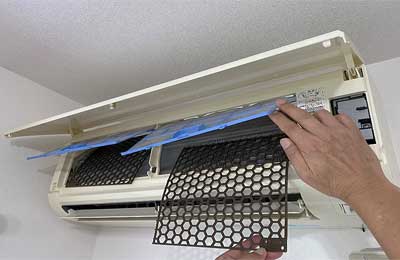 Open the front cover and install two pieces cut into 1/4 under the left and right filters as shown in the photo on the right. 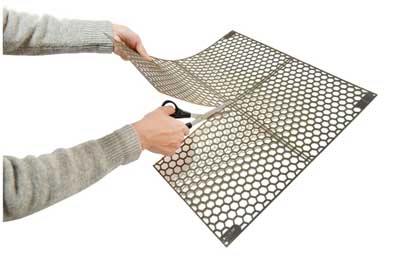